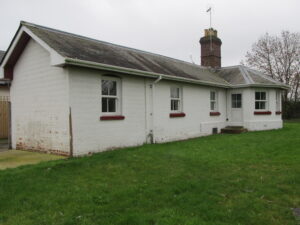 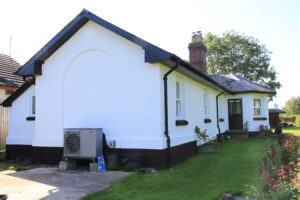 Before and After  –  The 1980s extension didn’t have the arch or the plinth and was in modern brick which was rectified. Shows air source heat pump.

We have always loved vernacular older buildings for their character, not only for their external features but for internal woodwork and design features. Our last house was a turn of century house built as a staff house for the large house next door. The only definite date we had was a scrawled 1901 on a bedroom wall found when we removed wallpaper.

When we bought it as a young married couple it was freezing cold and we couldn’t afford to heat it. 34 years later when we sold it, we had brought it from a probable F up to a grade B EPC which was warm and inexpensive to heat. We had installed cavity wall insulation, secondary double glazing, solar twin direct solar thermal panels to supply hot water, a new more efficient condensing boiler and double panel radiators, in that order. Having draught-proofed the house and further insulated the loft we noticed we had some condensation damp spots in the corners of rooms etc. This was solved with an inexpensive Positive Pressure Ventilation unit in the loft. Finally we fitted PV panels on our SW facing roof when we realized that although in a Conservation Area, it was not disallowed as our Council had thought. 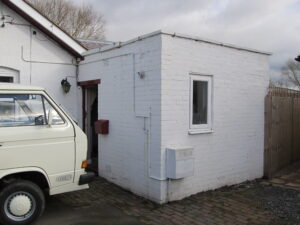 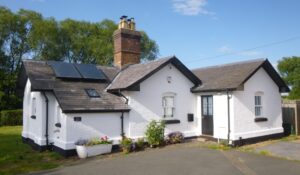 Before and After
Demolished flat roof early 20th C kitchen and mirrored the gable on the original house with an extension plus corridor to access 2 bedrooms.

We bought our present house in 2013 and moved into it in 2015 after we had retired. We bought it almost on impulse because it is a Thomas Telford designed lock house built in 1834 alongside the Newport Canal. Our son lived in it for two years which gave us time to get to know its problems. It was difficult to retain any heat and was prone to condensation on the inside of the exterior walls and there was a flat roofed kitchen extension which leaked. The house was ready for a complete restoration. Before we arrived we had obtained planning permission for demolishing the ugly kitchen and building a new extension incorporating a bathroom and corridor built in the same style as the original building.

Our aims were to be fossil fuel free and to make the house as energy efficient as possible. We consulted two local renewable energy companies and were advised an 8Kw air source heat pump would supply our requirements along with solar PV and a modern wood burner. As we did not want to use gas any longer, the supply was disconnected at the unexpected expense of £1100! You cannot stop paying the standing charge without it being disconnected.

The first stage in energy efficiency was to insulate the building as best as possible. External walls were deplastered, and the ceilings removed to allow extra bracing of the roof timbers. This gave the opportunity to install a whole house Mechanical Ventilation Heat Recovery (MVHR) system as it was easier to do before replacing the ceilings. The external walls were insulated internally with wood fibre panels and replastered with lime plaster and the impervious external paint was removed. Internally and externally mineral paints were used to ensure the solid brick walls were breathable.

The house has both solid and suspended wooden floors. The solid floors were dug out to allow room for the concrete sub base, 100mm of rigid foam insulation, plus 50mm of a highly conductive screed containing the underfloor heating pipes. In the suspended floors we fitted 50mm of rigid foam insulation between the joists with 25mm dry screed containing the heating pipes. Egger flooring panels were then fitted on top of these latter floors. After completion of the MVHR ducting, the ceilings were replaced and fitted with 270mm loft insulation.

Fortunately our house has a small cellar where the installation of hot water and central heating cylinders plus the controls for the heat pump could be housed. Also fortuitously the roof has South facing pitches which allow for a 2.1Kw solar PV system. A diverter switch was installed to direct surplus generated electricity into the immersion heater of the main hot water cylinder. Also a two panel solar thermal system was installed on the roof connected to a separate feeder hot water cylinder.

The house had had double glazing recently installed and this we retained as it was in a suitable style.

The result of all that we have done has transformed the house into a comfortable place to live, warm in the winter and cool in the summer, with low energy usage. Our solar PV generates approx. 2000 Kwh and we import approx. 2200 Kwh of electricity. The MVHR means we always have a fresh filtered air supply with no need for heat losing extractor fans. There is rarely ever a reason to open windows, even in the summer, which has the bonus of no flies in the house! All rooms have their own thermostat and the heating only warms the floors when the temperature falls 1° below the set temperature and switches off when it is reached. 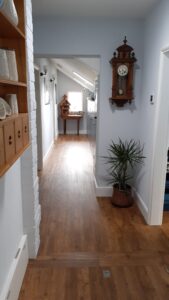 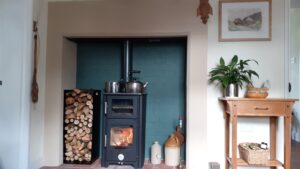 The floor is never uncomfortably hot, indeed, it is rarely noticeably warm. We use a modern wood stove which has a useful oven which is used daily in the winter which also reduces our energy consumption. We have a highly efficient electric induction cooker in the kitchen. We have found the induction hob to be much quicker and controllable than gas. We collect our own timber for burning which is seasoned under cover for three years. Heat from the wood stove is in effect circulated around the house because of the MVHR.

Having lived with the system for 3 years, some issues have become apparent with the solar thermal system overheating in the summer due to its cylinder being too small. As there is insufficient space for a larger one, we have decided to replace it with extra PV. This will increase our PV generation to a maximum of 3.9Kw. This should hopefully further reduce our electricity consumption.

The whole experience has been fascinating and interesting, and we continue to chip away at our carbon footprint which we have been doing since the 1980’s and it is even more vitally important now.