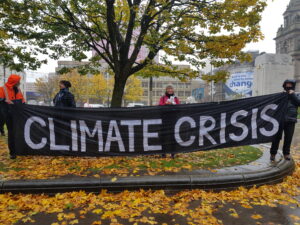 COP26 was hailed as a ‘last chance saloon’ for the planet, as leaders from around the globe met to plan together to address the climate crisis.  Given that greenhouse gas emissions must fall by 45% this decade in order to keep global temperature at the target rise of 1.5C, delaying action isn’t an option if we are to avoid catastrophe for millions around the world.

So how far did the agreements go toward meeting the four UN goals of COP26?

There is still a small chance of meeting the 1.5C target, with new national commitments showing a great improvement over pre-COP levels.  But much more needs to be done.  By the end of this century, scientists project:

Side agreements were good news (the Global Methane Pledge,  accelerated coal phaseout, and business pledges as part of the Race to Zero), and are likely to shave another 0.1C.

Coal is the dirtiest fossil fuel, and must be rapidly phased out for the world to have any hope of staying within 1.5C of global heating. Coal is mentioned in a COP agreement for the first time, but pressure from India watered down the wording from ‘phased out’ to ‘phased down’.

Fossil fuel funding for new overseas projects will be stopped by over 20 governments and financial institutions, in an important side agreement.  Channelling this funding into renewable projects instead will be vital, as well as extending the funding ban to all fossil fuel projects.

Zero emission vehicles: 22 countries signed a pledge for sales of all new cars and vans being zero emission by 2035 for leading markets and 2040 for other regions. Unfortunately, most of the major vehicle-manufacturing nations – Germany, Japan, the US, China, and France – are didn’t sign so this will have little impact.

Stopping deforestation: 137 global leaders signed a voluntary pledge “to halt and reverse forest loss and land degradation by 2030”.  However, there are grave doubts about the credibility of this declaration, with no sign of actual policies. Indonesia has already signalled a change of heart and Brazil is weakening rather than strengthening forest protection.

Financial support from richer to poorer nations saw some improvement, but not enough. Many poorer nations who have contributed little to the damage are already affected by climate change and at greatest risk from disasters ahead. Finance from richer countries has been promised before, but never fully delivered.  The COP agreement calls on richer countries to scale up their financial support, both to help poorer nations develop low-carbon energy systems and to build resilience to climate damage.

The issue of payments for loss and damage that is too destructive to be prevented or protected against will come back for future discussion, since richer nations are wary of being help liable for compensation.

Food and farming was not a major issue, even though about 20% of global emissions come from agriculture and land use, rising to more than 25% for the food system as a whole including processing, packaging and transport.

$100bn promised: Poorer countries have been promised increases that will bring $500bn during the next five years.  The text agreed to double the proportion of climate finance going to adaptation, since emission cutting projects in middle-income countries have attracted most funding, while the poorest countries who need money to adapt to the impact of extreme weather struggle to obtain any funding at all.

The Race to Zero United Nations-led campaign is mobilising private and public sector finance  to commit to achieve net zero carbon emissions by 2050 at the latest.

The UK has published a COP26 private finance strategy to drive Whole Economy Transition, setting out an approach toward the goal of every financial decision taking climate change into account.

Reaffirming the Paris agreement to aim for 1.5C kept the momentum toward the need for rapid change, since science now shows clearly that 1.5C is much safer than 2C and that every fraction of a degree counts.

Carbon trading rules were finalised allowing the fossil fuel industry to “offset” its carbon emissions and carry on polluting. Combined with the “phasing down” change, this will see fossil fuel emissions continue.

Accelerating action was a clear win, with an agreement to come back next year instead in of 5 years.  Stepping up the timetable for tougher targets will put pressure on countries to improve their commitments to reflect the urgency we face in keeping the global temperature rise to 1.5C.

Climate justice could come in the courts:  Once a country ratifies a treaty like the Paris Agreement — as most have now done — it becomes legally binding. And while countries are not suing each other in international courts, people can sue their own government or businesses in their own countries for lack of action on the climate crisis. Being armed with agreements like Paris helps, and there have been successful challenges already.