What’s an IPU, and what does it have to do with Shropshire? 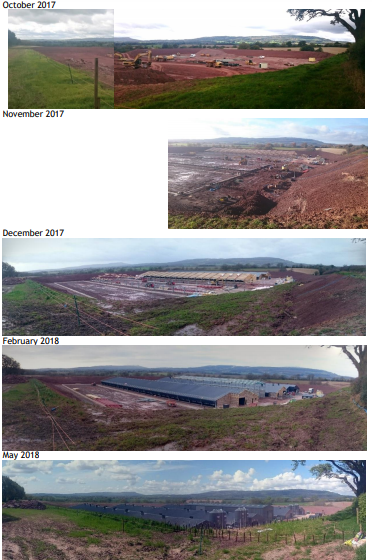 It was suggested to me recently that I read an article about the effect IPUs have on the Shropshire countryside. I think we can all agree that if someone asks you to read more than a page of words they are strange and actually slightly rude. The only reasonable thing to do in this situation, of course, is to skim-read just enough so that, if they ask you a question about it, you could potentially fumble a reply. ‘Perfect’ I thought, ‘so what’s an IPU?’ The answer lay at the top of the page… this was going to be a doddle. It explained that IPU stands for Intensive Poultry Unit which is basically a group of sheds and most contain around 55,000 chickens. I immediately thought of the floor space in my dad’s shed and realised we were not talking about a B&Q self-build. If my skimming has served, the chicks get marched off after a month or two and, failing some kind of Aardman-style coup in the coop, they croak it. It was at this point I realised I had probably crammed enough to pass an informal conversation, all I would have to do is pad out the following sentiment: IPU = bad for chickens. It would be like university all over again.

Just in case I needed to follow up my brilliant insight with some kind of qualifying statement I read on. I reached the heading ‘IPU controversies’ and figured the pleasantly bullet pointed list underneath would provide me with more than enough ammo to put to bed any doubts that I had indeed read and understood the tone of the piece. It appeared that IPUs give off an incredibly bad smell, there is evidence that they pollute the water via local rivers and negatively impact biodiversity amongst other things. It was at this point that I realised that this was more than a chicken problem. I drink tap water. I have been known to have a paddle in the river. I love the local flora and fauna. I dislike bad smells. I held my nose and re-configured my statement: IPU = bad for chickens and local residents.

With IPU numbers constantly on the rise, the number of people who might count themselves under the heading of “local resident’ is very much on the increase too, especially in Shropshire where over 180 units have been built in the last 20 years. It was at this point I decided to go against my better instincts and ask Google for more information. I typed ‘benefit of IPU farming’ and after much trawling all I could figure was that cheap meat is what people want. However cheap it becomes though, this meal will never be free. It also suggested that many small farms struggle to turn over a profit each year and IPUs represent one of the most lucrative ventures for a farm. Below is the article by Alison Caffyn and I invite you to skim it. I won’t ask you any questions about it, but feel free to answer the following statement: IPU = ? 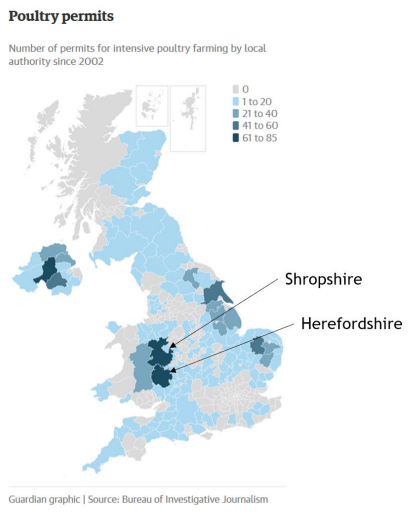