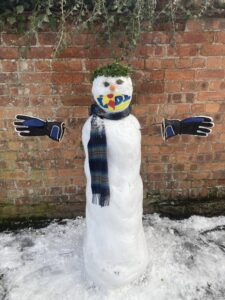 Photo and text by Jack Rennie |

My workplace put me on annual leave early in February because I hadn’t really used any holiday for a whole year, and all of a sudden I felt that feeling everyone around me had been describing this whole time. Yes, with nothing to do and nowhere to be, I instantly turned into my grandad. I even remember contemplating buying a pair of slippers, and not the cool kind I had as a kid where I would put my feet into the mouth of a popular cartoon character and act out a muffled impression as I did “Doh!” No, I actually caught myself weighing up a pair of tartan moccasins, the kind with a proper rubber soul that’s built to last. Luckily some stronger and more desperate voice within me brought me round, with a cry of “Noh!”.

I shuffled out that morning to do a different kind of soul searching, and to buy a newspaper (I also bought some chocolate), breaking up a rather intense session of thumb twiddling. I got home and noticed I had already bought exactly the same paper a few days before. My granddad was forgetful, but even he wouldn’t have done this. I decided to keep it as I had already paid for it and I figured a newspaper isn’t the kind of thing you could return, I would only have spent the money on more chocolate anyway. I thumbed through it again, partly to ensure I got my money’s worth and partly to teach myself a lesson. Most of it I realised I hadn’t actually taken on board the first time round. For example, there was an article about a children’s author who had just written a book and was running a competition for young children to have a go at writing their own stories. Brilliant I thought, encouraging kids to get creative. I have to be honest at this point and admit that I sent off a story of my own despite being around twenty years older than the maximum age limit. In my defence I was still extremely on edge about slipper-gate and I think this was my attempt at tipping the seesaw the other way. That’s when I came across an article about a local environmental group called Zero Carbon Shropshire. As I read on I learned that they are a collection of people, organisations and businesses trying to make Shropshire Carbon Neutral by 2030. The feeling that came over me was one of guilt as the words were printed on paper and it was my second one of the week, I felt compelled to join the cause.

Later that day I found myself on the phone with Sian, a passionate energetic woman who clearly hadn’t twiddled her thumbs for a long time, maybe ever. I thanked her for getting back so quickly at which point she reminded me it had been a couple of days since my original message, “ah yes of course” I blathered. What had I been doing for two days? I made a mental note to check my Amazon order history for clues and to do something recklessly youthful to offset my memory loss. I agreed to join the Communications group meeting the following Wednesday on zoom and spent the next few days making sure my other commitment didn’t overlap (I built a snowman). In the run-up to the meeting I listened to one of the younger members of Zero Carbon Shropshire talking about the environment on a local radio show and I was blown away. She was only in her late teens but she was so confident and had such interesting ideas and opinions about the environment. How could someone so young be so clued up? At this point I realised I had perhaps tipped the seesaw too far the other way and I should maybe buy the slippers after all, thank goodness the snowman had melted. Suitably nervous I logged on for the meeting. I won’t go into details about what was said in the meeting because I can’t really make sense of my notes but, fortunately, Sian had headed the meeting and sent me some more information afterwards about a tree planting initiative that was underway. Since the meeting I have done very little in terms of lifestyle change, so instead, here is a children’s story:

There was a boy who would always hold his breath because he was worried about taking up all the oxygen. One day he got so dizzy he had to steady himself on a tree. 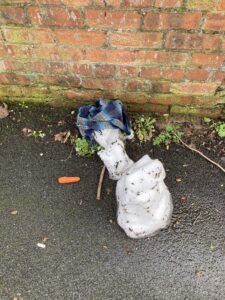 “What are you doing?” said the tree breezily.

“I don’t want to breathe in all the oxygen,” said the boy.

“What’s the problem with that?” whistled the tree.

“Well I will only breathe out carbon dioxide,” barked the boy, looking glum.

“You know,” smiled the tree, “I breath in carbon dioxide”.

“What do you breathe out?” asked the boy, excitedly.

“Why oxygen, of course!” laughed the tree.

“Let’s be friends”, beamed the boy, and he sat and breathed the deepest breath he had ever breathed.